On May 11, 10 graduating high school seniors from Let’s Get Ready College Access Program took the stage at the Apollo Theater in Harlem, New York, for the annual College Decision Day event. They participated alongside 250 peers from 25 local organizations that provide college access services to students from low-income circumstances. The event celebrated months of hard work and preparation, during which the students toiled over standardized tests and college applications, leading up to the moment when they would announce the schools they had chosen to a cheering crowd.

Avery Miller, who will be attending SUNY Geneseo starting in fall 2017, was one of the students who represented Let’s Get Ready. “That was my first time ever speaking into a microphone,” she said. “Sharing my college decision was one of my happiest moments!” 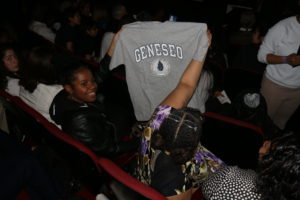 ABC News correspondent Ron Claiborne served as the master of ceremonies for the night, keeping the tone uplifting and informative with jokes and higher education factoids. Keynote speaker Carla Harris, a Managing Director at Morgan Stanley as well as a motivational speaker and author, addressed the crowd with passion. “Her presentation, her motivation, and her advice were such an inspiration,” said Miller, who describes the underlying message of Harris’ talk as a “challenge to continue successfully no matter the path.”

The night also featured musical performances from Rhonda Ross (daughter of Diana Ross), and the Emmy Award-winning ensemble of Vy Higginsen with the Gospel for Teens Choir, which brought Miller’s mother to tears.

A critical component of the evening was the student breakout session, which had the seniors mingling in small groups. “Meeting other students was really great preparation in networking,” said Miller. There was also a parent-to -parent workshop, which Miller’s mother called a “sounding board” for parents to voice their concerns and show support.

In sum, the event was an exuberant affirmation that high school students from low-income backgrounds have the potential to overcome any obstacles that stand between them and their college degrees. The significance of the event taking place at the Apollo, a historic venue that has centered people of color since the era of segregation, was not lost on Miller. “We are writing the histories of our neighborhoods and our own families by graduating high school, being the first to go to college, or the first receive a college degree,” she said. “Many of the people involved in the Let’s Get Ready program look like people from our communities and our cultures. The Apollo Theater was the most appropriate venue to display our intellectual and academic talents.”

Miller plans on majoring in Biology at Geneseo. She describes herself as a “future physician and aspiring podiatrist.”

We are very excited about our newest partnership with the @meetingstreetscholarshipfund – our first in South Carolina! Learn more about the collaboration and how LGR plans to support Meeting Street students: https://bit.ly/3SDESy8

A look back at some key takeaways from our recent Career Night event. Participants were asked to share one lesson learned and here's what they had to say. These lessons are true for both amateur and seasoned professionals, so take note and always remember: your voice and experience matters. Speak up, connect with others, prepare for your future, take every shot.

September 15th marked the beginning of #HispanicHeritageMonth - a celebration of the diverse cultural heritages across Latin America and their contributions to the United States. We honor and thank our Hispanic and Latinx community, including our students, staff and partners! 🦋

#NCAN2022 was such an inspiring event, and amazing opportunity for our team to connect with thousands of national advocates for postsecondary attainment including @onegoalgraduation - recipient of this year's 'Member of the Year' award + @achieveatlanta, @thekresgefoundation, @thepnpi. We appreciate the impressive breadth of knowledge shared, and thank the National College Attainment Network for hosting such a thoughtful and galvanizing experience. Good luck to all of our peer orgs this school year!

Flashback to Grad Bag 2022 in Boston, an annual event where we provide college dorm room essentials to underrepresented and first-gen college-bound students, at no cost to them . 🙌 to our star interns, partners and supporters! @gradbag @templeshalomofnewton @nnhst2 @beaconacademy

Are YOU ready for college? Let's Get READY!

Summer is up and school is back! How have YOU prepared for the new school year, and what are you most looking forward to? Share in the comments below!

We're excited to kick off the Fall semester, and our Coaches are ready to support our students whether you're back on campus, learning virtually or both. Apply for Let's Get Ready's FREE near-peer mentorship program and gain access to year-round virtual support from trained college students who provide guidance throughout the college admissions process, and post enrollment counseling. We're here to help you on your journey to and through college. If you are a high school senior or college student, apply today:

We wish all of our students and Coaches a safe and fun school year full of learning and growing, together.